A Short History of Sundials 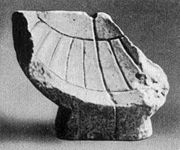 Already thousands of years ago it was clear to human beings that the length of the shadow is varying throughout the daycourse being shortest at noon. Now it was only a short step from this insight till the measurement of time.

The principle of the sundial is well-known in China since 2679 B.C., and about 1100 B.C., they use a gnomon to define the exact day-time. About 100 B.C. Lo Hsia Hung uses an armillary sphere (ballring).

Also in India sundials are used since centuries, well-known e.g. are the stone sundials in Jaipur and Delhi, erected by the maharaja of Jaypur, Jai Singh II. in the 17th century.

In Greece Ptolemäus mentioned sundials already 140 B.C., also Herodot writes about 450 B.C. that the Greeks had overtaken them from the Babylons. It is said that the  baylonian Chaldeans had invented the sundial about 1600 A.C. in Europe.

The Romans knew sundials since 300 B.C. spreading them over Europe. Not before the 14th and 15th century A.C. the gnomon was erected in parallel to the earth axis. With this it was possible to show equinoctial hours and to be independent of the varying length of the hours troughout the year.

Since the 15th century sundials are produced industrially (compass makers in the Middle Ages), very famous for travelling have been the portable sundials.

Sundials are also used in our times to correct the normal clocks, being more hardy against sand and dust. Still in the second world war sundials have been used by English troops in Africa.

Nowadays sundials are a popular decoration in parks or at public buildings, but also at private houses and gardens people are fond of the variety of styles.